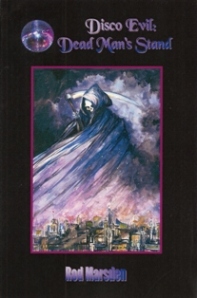 “Make Love, not war” was the catch cry of a generation. Growing up, it meant everything to Paul Priestly but nothing to those who owned and managed The Blue, an inner city Sydney disco.

When Paul became a vampire, he swore to avenge himself on the destroyers of make love, not war. In many cities of the world, such as London, New York, and San Francisco, he would seek them out and take their blood. He would recruit from the living to aid him in this great work. In other words, as a walking cadaver, a mobile corpse, he had made a stand – a dead man’s stand.

He vowed this would be the last time he stepped into the disco club, The Blue, but Paul Priestly never guessed how right and wrong he was. So many rejections can make a man do some crazy things, but when that man becomes a vampire, the world better stop and take notice.

Never one to take the easy route, Miles Henry becomes one of the elite undercover operatives for the Secret Compass. Their mission is to eradicate the vampire vermin from the earth. However, his mission is much more personal, and he vows to take out the one vampire who murdered his niece.

Paul admits to making a multitude of mistakes after his turning, but he cannot understand the personal vendetta the Secret Compass seems to have against him. He moves constantly to avoid their attacks, and over the span of many years, he circles the globe. The close calls happen with frightening frequency and still Paul manages to escape, much to the frustration of Miles and the Secret Compass. Miles knows his age is catching up with him, and if he cannot fulfill his personal vow, he can only pray that his great nephew will continue the fight…World history seems to be the reigning theme, the detail of which is well researched and delivered with a true sense of imagination and knowledge. –Lototy, Reviewer for Coffee Time Romance & More

Finally getting the chance to comment back on DISCO EVIL: DEAD MAN’S STAND…You have certainly taken an interesting angle on vampire culture, with not only the uncompromising contemporary setting, but the ‘moral code’ adhered to by your (anti-) hero. Indeed, the entire novel has a ‘both-sides-to-the-story’ aspect which leaves one finally unable to take sides. As in life, no one is either all good or all bad. You make this point repeatedly, and stress the need for mutual understanding and co-operation. This indeed comes to pass not only between the Secret Compass and Rising Sun Group, but with Muslim and non-Muslim Australians…

I must say I have thoroughly enjoyed being transported around the globe for a bat’s-eye view of human existence in recent times. I like the way you handled differing timescales, with life going on as normal in NSW, while Paul maintained eternal youth. The only fault I found with this was that it didn’t leave enough scope for in-depth vampire adventure on those travels. That’s an unavoidable problem, I suppose, since too much time spent with Paul would unbalance the structure of the novel. He did at least have some exciting near-misses with the forces of Life and Order. I have to say, I didn’t fancy his chances with those Maclean fellows one bit…

Anyway, I’ve had a ball reading your book. I found myself drawn into your fictional world and engaging with your characters in a way that says plenty for your descriptive skills. I hope you have a great success with it, and that it leads the way for many more.

All the best, –Neil K. Henderson, author of a number of MALDEHYDE’S DISCOMFITURE, FISHWORSHIPPING – AS WE KNOW IT, AN ENGLISH SUMMER IN SCOTLAND AND OTHER UNLIKELY EVENTS, and HORMONES A-GO-GO (Atlantean Publishing, 2009). 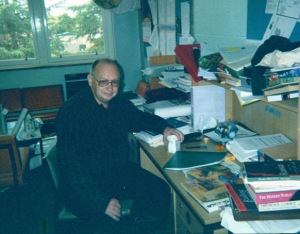 Rod Marsden was born in Sydney, Australia. His very early influences were his father, Charles, who taught him how to fish and how to appreciate nature and his mother, May, who helped him to value the written word. Other early influences include writer Stan Lee and artists Jack Kirby and Gene Colan. He has three degrees; all related to writing and to his other passion, history. His stories have been published in Australia, England, Russia and the USA. His written work includes short stories in Cats Do it Better. Undead Reb Down Under and Other Vampire Stories is a collection of his stories on vampirism. His novel Disco Evil: Dead Man’s Stand is his first venture into the vampire novel. Of late he has been tinkering with computer art. Rod Lives on the South Coast of NSW, Australia and still occasionally puts a line in the water. He has a fondness for the Wollongong area but an abiding love for the more northern Clarence River region of his home state.