When a bomb explodes in a van parked outside the first mosque ever built in the UK, local police immediately suspect that it’s a racially-motivated attack carried out by local right-wing extremists…however, as Detective Superintendent Alec Ramsey’s investigation deepens, he uncovers a simmering feud between two families that goes back decades at the center of the attacks…soon, Ramsey finds himself struggling to bring the real killers to justice as the looming shadow of international political influence begins to render his efforts increasingly in vain . . .

Slow Burn is a dynamic suspense thriller. In his standout seventh offering, prolific author Conrad Jones skillfully interweaves global political intrigue with family drama and tragedy to craft a taut, action-packed tale of the perils of succumbing to the dangerous throes of vengeance. Coming in at just over 300 pages, Slow Burn reads like a novel less than half its size as Burns masterfully strings together compelling characters and intersecting plotlines to forge a fast-paced, edge-of-your-seat read sure to grip the reader in breathtaking suspense with the turn of each new page. A highly recommended instant classic from a proven literary talent. — Josee Morgan

His best one yet!` –Guardian

`Unputdownable, I read it in one day!` –Real Book Reviews

`Conrad Jones gets better with every novel,` –First Writer 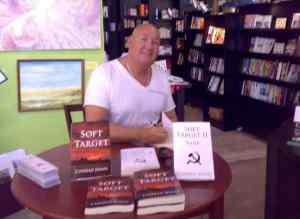 Conrad Jones is a 45-year old Author, who lives in Warrington, Cheshire. He worked in senior management at McDonalds Restaurants Ltd. On march 23rd 1993 he was managing the Restaurant in Warrington`s Bridge St when two Irish Republican Army bombs exploded directly outside the store, resulting in the death of two young boys and many casualties. Along with hundreds of other people there that day Conrad was deeply affected by the attack, which led to a long-term interest in the motivation and mind set of terrorists. There are now seven books in the series with three more to be released next year. (2011) Despite soliciting hundreds of agents and publishers, Conrad is still an indie author, six of the series are in the top 20 kindle thrillers, one is top of the kindle `war` list.

« The Adventures of Machu and Jack by Tabitha Grace Smith
Shadowed In Silk by Christine Lindsay »
%d bloggers like this: